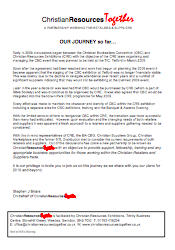 Mandy Briars of CRE has kindly given permission for us to make the handouts from the Stronger Together – Weaker Apart consultation and presentation day available for those who were unable to attend.

More information should be on its way to retailers by the end of this month and the website — christianresourcestogether.co.uk — should be updated even sooner.

The first page of the handouts, excerpted here, sets the scene; to read the rest, download the pdf (1MB, 15 pages; thanks to Mark Fleeson of Lindisfarne Scriptorium, who converted the original Word files to pdf).

OUR JOURNEY so far…

Early in 2008 discussions began between the Christian Booksellers Convention (CBC) and Christian Resources Exhibitions (CRE) with the objective of the CRE team organising and managing the CBC event that was planned to be held at the TIC, Telford in March 2009.

Soon after the agreement had been reached and work had begun on planning the 2009 event it became apparent that the staging of the CBC exhibition at Telford was no longer financially viable. This was mainly due to the decline in delegate attendance over recent years and a number of significant suppliers indicating that they would not be exhibiting at the planned 2009 event.

Every effort was made to maintain the character and identity of CBC within the CRE exhibition including a separate area for CBC exhibitors, training and the Banquet & Awards Evening.

With this in mind representatives of CRE, the BA-CBG, Christian Suppliers Group, Christian Marketplace and the former STL Distribution met to consider the current requirements of both retailers and suppliers. Out of the discussions has come a new partnership to be known as ChristianResourcesTogether with an objective to provide support, fellowship, training and any appropriate business opportunities for those working within the Christian Retailers and Suppliers trade.

It is our privilege to invite you to join us on this journey as we share with you our plans for 2010 and beyond.

3 thoughts on “Our Journey So Far: Handouts from Stronger Together – Weaker Apart #stwa”