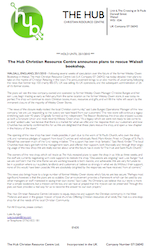 Mother and son team, Christine and Luke Bunger, have today announced plans to save the former Wesley Owen Christian bookshop in Walsall. The shop ceased trading this weekend, one of the casualties of parent company IBS-STL UK’s collapse into administration shortly before Christmas 2009.

Christine Bunger was manager of Wesley Owen Walsall, where Luke, a frequent commenter on this blog, worked on a part-time basis. Luke was also responsible for the branch twitter stream, @wowalsall. The new store, The Hub Christian Resource Centre Ltd, is expected to open in mid-February, trading from the same premises in the Crossing at St Paul’s to continue a longstanding legacy of Christian retailing in the town. The Beacon Bookshop, Walsall’s first Christian bookshop, became part of the Scripture Union group before Wesley Owen took over operations. Luke, who takes on the role of Operational Manager of the new company, explains:

It’s a legacy which we were not ready to see come to an end. We believe that there is a market for what we offer, and the response from our customers and local Churches has certainly confirmed this for us. We are delighted that these plans rescue the shop, and open a new chapter in the history of the store.

Discussions [with suppliers] are ongoing but we are confident that the time frame we are working towards is both realistic, and achievable. We are very fortunate to be in a position where our suppliers, landlords and customers all believe so strongly in what we do. Without their support, none of this would have been possible. We are absolutely delighted by the responses we have received from all corners.

The Revd Mark Kinder, Priest-in-Charge of St Paul’s (which owns the shop unit), oversaw a large part of the fundraising initiative that has made the planned relaunch possible. He said:

The support has been truly fantastic. The local Churches have really got behind the management team, and offered their support, both financially and through their ongoing usage of the new shop. We are really excited about what the future has in store for The Hub and Saint Paul’s Church.

The Hub aims to become a one-stop-shop that will equip and support the local Christian community, stocking a wide range of Christian books, music, resources and gifts.