News emerged over the weekend of fresh redundancies at STL Distribution, Carlisle, with 10 warehouse staff leaving on Friday, Feb 19th. Sources indicate that the total workforce is expected to be cut by 1/3, with the next round of redundancies cutting staff in the Customer Services section due to be announced this week.

The redundancies are voluntary, following a consultation period that ended on February 17th. Those who remain are believed to be safe “if business picks up”.

Update, 11.30pm, Feb 22nd: An official statement from Ken Munro, CEO of STL Distribution, citing numbers and requesting prayer for those affected, was posted on the STL Blog at 8.48pm this evening. Describing the cuts as a “planned re-sizing”, Ken writes:

A fundamental part of this process was the instigation of a consultation period which ended on the 17th February with the outcome being that 45 of the 180 Carlisle based posts would no longer be required. During the consultation 30 members of staff chose to take voluntary redundancy or left having secured alternative employment. We are now moving towards the conclusion of this process and once it is completed, I am confident we will have a strong foundation in terms of skills and experience, on which STL Distribution can develop and face the future with confidence. 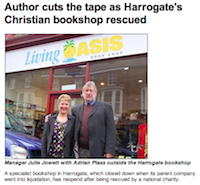 The first branch of Living Oasis has now opened in Harrogate following the acquisition of the former Wesley Owen premises by Nationwide Christian Trust.

Plans are also underway to reopen the former Wesley Owen in Leeds: a meeting with church leaders in Leeds to discuss possibilities is scheduled for Thursday, March 4th.

Official Opening of The Hub, Walsall

This week — 1pm, Thursday Feb 25th — sees the official opening of The Hub, Walsall, another former branch of Wesley Owen, with Christian musicians Phatfish led by Lou Fellingham on hand as special guests to help things along. The group will be appearing live in store during the day and in concert at Walsall Independent Evangelical Church in the evening.

Special opening day offers include a 5% discount on all full priced items (10% when spending more than £25) if you join the shop’s mailing list and mention this site, UKCBD, as where you heard about the opening (offer valid 25th-27th Feb).

Error: Twitter did not respond. Please wait a few minutes and refresh this page.