OVER THE LAST MONTH or so we seem to have had a plethora of awards in the Christian book trade, so without further ado, congratulations all round to those who’ve won, commiserations to the runners-up, and one or two other congratulatory notes as well because there’s more, much more, to life than winning awards. Rumours of the trade’s demise are a tad premature, methinks… 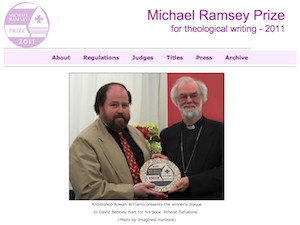 CONGRATULATIONS to the Booksellers Association on the recent launch of their facebook page: you don’t have to be a BA member to like it, and it’s an easy way to keep up to speed with their latest news delivered direct to your facebook feed. You are on facebook, aren’t you?? 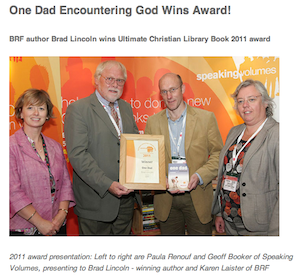 CONGRATULATIONS to Brad Lincoln, pictured with (left to right) Paula Renouf and Geoff Booker of Speaking Volumes, presenting him and BRF’s Karen Laister with the Ultimate Christian Library Book Award 2011 at CRE Sandown Park on 11 May 2011 for his book, One Dad Encountering God.

CONGRATULATIONS to the many and various winners of the numerous awards presented at this month’s Christian Resources Together event at High Leigh. The CRT publicity engine seems to be grinding a little slowly and I’ve yet to receive details of all the winners, but — with a special mention for IVP on a double win, overall Book of the Year for John Stott’s The Radical Disciple and Over 12s Book of the Year for Rachel Gardner’s Cherished — those that have come to my attention so far are: 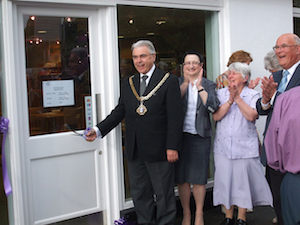 CONGRATULATIONS to all involved in the recent official opening of Macclesfield’s new Christian bookshop and resource centre, The Hope Centre, who you’ll also find twittering with the rest of us @HopeCentreMacc. With only 6 followers as I post this update, they’re looking kinda lonely so why not head on over there and show them some twitter love? Opening day photo courtesy of Robert Marshall, @rajm: discover more on flickr.

… for those of you who don’t know, I will be marrying Andrew Wilson on 2nd July. After eight years on my own since my first husband died, it is wonderful to have someone to share life with. We met at CRE last year. (I’ve since met another couple who met at CRE!) Andrew is on the staff of a charity that supports those around the world who are persecuted for their faith in Christ. He is also a former journalist, and does some editing and proof-reading for us.

More news from Dernier Publishing coming up next week…

LAST BUT BY NO MEANS LEAST, CONGRATULATIONS to SPCK Sales Director Alan Mordue, recognised by the USA’s Episcopal Booksellers’ Association award as ‘Best Overseas Supporting Vendor’ for his ongoing work over the last three years, including annual visits to the Religious Booksellers Trade Exhibit and Society of Biblical Literature meetings.

2 thoughts on “News Roundup: The Awards and Congratulations Edition”