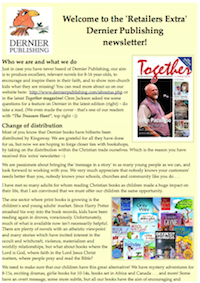 DERNIER PUBLISHING, publishers of Eleanor Watkins’ acclaimed Beech Bank Girls series, have left Kingsway Distribution and are now distributing direct to the trade. In a special ‘Retailers Extra’ newsletter issued earlier this month, Janet Wilson explains what has proved to be a timely decision:

Most of you know that Dernier books have hitherto been distributed by Kingsway. We are grateful for all they have done for us, but now we are hoping to forge closer ties with bookshops, by taking on the distribution within the Christian trade ourselves. Which is the reason you have received this ‘extra’ newsletter.

We are passionate about bringing the ‘message in a story’ to as many young people as we can, and look forward to working with you. We very much appreciate that nobody knows your customers’ needs better than you, nobody knows your schools, churches and community like you do…

If you’re a retailer who has not yet received the full ‘Retailers Extra’ newsletter — which includes details of trade terms including higher discounts for multiple copies — contact Janet. 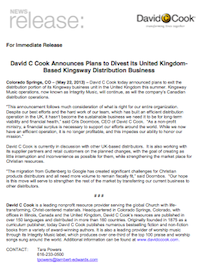 THE FINAL CHAPTER appears to have been written in the long-running saga of Kingsway’s struggles to deliver a viable UK trade distribution service as US owners David C Cook have decided to pull the plug on the business. Declaring the service to be no longer financially viable in a press release dated 22nd May 2013 (issued to UK retailers yesterday) Cris Doornbos, CEO of David C Cook, explained that the company could not afford to carry a non-profit-making division within its portfolio:

As a non-profit ministry, a financial surplus is necessary to support our efforts around the world. While we now have an efficient operation, [Kingsway Distribution UK] is no longer profitable, and this impedes our ability to honor our mission.

The press release states that the company is “currently in discussion with other UK-based distributors” and hopes to be able to divest itself of the business with “as little interruption and inconvenience as possible” for suppliers and retailers.

No mention, however, is made of the ramifications for its UK based team and Kingsway themselves have as yet to comment on the situation. Retailers and other trade partners have expressed dismay and are offering solidarity with and prayers for the staff as they face an uncertain future. 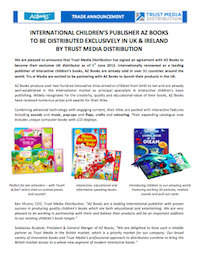 We are pleased to announce that Trust Media Distribution has signed an agreement with AZ Books to become their exclusive UK distributor as of 1st June 2013. Internationally renowned as a leading publisher of interactive children’s books, AZ Books are already sold in over 51 countries around the world. Trust Media are excited to be partnering with AZ Books to launch their products in the UK.

AZ Books publish a range of innovative and interactive children’s books that include sounds and music, pop-ups, flaps, crafts and colouring and, in some cases, LCD displays.

Full details may be found in TMD’s press release/trade announcement or on the TMD blog.