WHAT BETTER WAY to start the week than a round-up of good news stories? Congratulations to all involved as Aslan Christian Books take on a fourth location, Bristol Cathedral Shop; to Andrew Franks, founder of Cornerstone Christian Bookshop, North Finchley, as his CRT 2013 Long Service Award makes local headlines; and to Christian Solutions, St Helier, as they celebrate the shop’s 40th anniversary: 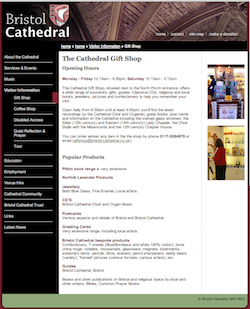 Aslan now have two shops in Bristol, the other being the company’s flagship store at St Stephen’s in the City, opened in July last year. Congratulations in particular to Lydia Ruth Zwozny, who moves from a part-time to a full-time position with the Aslan team as part of this development.

CONGRATULATIONS are in order, of course, for all the CRT2013 Award Winners — the full list and photos may be found on the CRT site — but special congratulations must be made to Andrew Franks, founder of Cornerstone Christian Bookshop, North Finchley, whose Long Service Award award has made headlines over the weekend with Local London and the Hendon & Finchley Times:

A religious bookshop owner who claims to have sold more than 20,000 Bibles has been handed an award recognising his contribution to the Christian faith.

Andrew Franks, of Sunny Way, North Finchley, was given a long service award from the Christian Book Trade after decades of promoting the texts in his independent bookshops.

The entrepreneurial businessman first set up his Cornerstone Christian Bookshop in Woodhouse Road, North Finchley, in 1981…

LAST BUT BY NO MEANS LEAST: Congratulations to Christian Solutions, St Helier, Jersey, as they celebrate the shop’s 40th Anniversary, a remarkable achievement in an era when so many Christian retailers have ceased trading. Once again the local press, in the shape of This is Jersey/Jersey Evening Post took up the story over the weekend:

JERSEY’S Christian bookshop is celebrating its 40th anniversary this year.