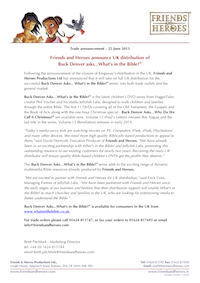 FRIENDS AND HEROES, publishers of the popular children’s DVD series of the same name, have lived up to their name by coming to the rescue of the Buck Denver asks… What’s in the Bible? series in the wake of David C Cook’s decision to drop Kingsway Distribution in the UK (reported last month: Kingsway to Quit Distribution).

Today’s media-savvy kids are watching movies on TV, Computers, iPads, iPods, PlayStations and many other devices. We need more high quality Biblically-based productions to appeal to them. We have already been in an exciting partnership with What’s in the Bible? and Jellyfish Labs, promoting this outstanding resource to our existing customers for nearly two years. Becoming the main UK distributor will ensure quality Bible-based children’s DVDs get the profile they deserve.

We are excited to partner with Friends and Heroes for UK distribution. We have been partnered with Friends and Heroes since the early stages of our business and believe that their distribution support will enable What’s in the Bible? to reach churches and families in the UK, who are looking for entertaining media to better understand the Bible.

The latest release of What’s in the Bible? is Volume 11, Spreading the Good News, which takes viewers on a journey through the book of Acts. Starting with Pentecost, the story follows Jesus’ disciples as they spread the Good News through the world then moves on to the conversion and ministry of the Apostle Paul: