MY THANKS to Steve Briars for kind permission to reproduce the following excerpt from the forthcoming August/September edition of Together magazine: 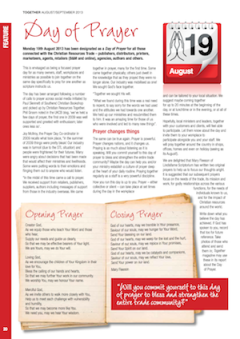 Monday 19th August 2013 has been designated as a Day of Prayer for all those connected with the Christian Resources Trade – publishers, distributors, printers, marketeers, agents, retailers (B&M and online), agencies, authors and others.

This is envisaged as being a focused prayer day for as many owners, staff, workplaces and ministries as possible to join together on the same day specifically to pray for one another as scripture instructs us.

The day has been arranged following a number of calls to prayer across social media initiated by Paul Slennett of Southend Christian Bookshop and picked up by Christian Resources Together. Phil Groom noted in the UKCB blog, ‘we’ve held a few days of prayer, the first one in 2009 was well supported and greeted with enthusiasm; later ones less so’.

Joy McIlroy, the Prayer Day Co-ordinator in 2009 recalls what took place, “In the summer of 2009 things were pretty bleak! Our industry was in turmoil (due to the STL situation) and people were frightened for their futures. Many were angry about decisions that had been made that would affect their ministries and livelihoods. Some were putting words to their emotions and flinging them out to anyone who would listen.

“In the midst of this time came a call to prayer. We received support from retailers, publishers, suppliers, authors including messages of support from those in the industry overseas. We came together in prayer, many for the first time. Some came together physically; others just dwelt in the knowledge that as they prayed they were no longer alone. Our industry was mobilised as one! We sought God’s face together.

“Together we sought His will.

“What we found during this time was a real need to repent, to say sorry for the words we had used and the attitudes we had towards one another. We held up our ministries and resubmitted them to him. It was an amazing time for those of us who were involved and led to many new things”.

The article goes on to look forward to this year’s Day of Prayer and offers some simple ideas on how to make best use of the day along with suggested opening and closing prayers by Mary Fleeson of Lindisfarne Scriptorium. It may be downloaded as a pdf (123kb), either here or from the Day of Prayer section of the Together website.

2 thoughts on “Day of Prayer Update”