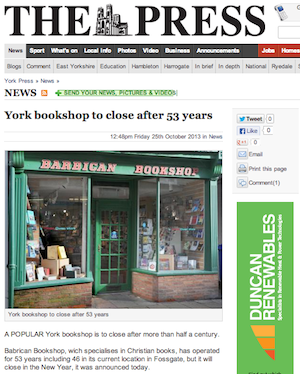 THE LAST BUT ONE BRANCH of the once more than forty-strong Wesley Owen chain of Christian bookshops is slated for closure in the New Year, according to a report in the York Press issued today, 25/10/2013, York bookshop to close after 53 years. This leaves the company, now owned by Koorong, Australia, with a single branch at Carrs Lane Church in Birmingham, from where its mail order/online operations are currently processed.

The report cites a statement from the company that outlines the reason for the closure as declining sales due to changes in the bookselling /retail worlds, then goes on to praise the staff team — with a special tribute to the Bingham family as the shop’s “driving force” — for keeping the business running for so long:

The worlds of bookselling and retail have changed immensely over the last ten years, with online selling, the manner in which people read and the way churches resource themselves all reducing the sales in our shop.

Over this time the long-standing team in the store have worked tirelessly to adapt to the new trading environment, but the financial realities have caught up with us.

The Barbican has had a long and illustrious history, with its eclectic range of books, its unique specialisms of York, railway and aviation books as well as its core range of Christian titles so the owners of Wesley Owen would like to pay a special tribute to the Bingham family who over the years have been the driving force behind the shop.