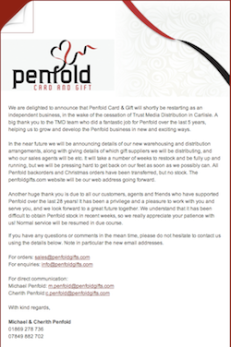 CONGRATULATIONS to Michael & Cherith Penfold and their team, who yesterday announced a relaunch of Penfold Card & Gift.

Both Penfold Card & Gift and STL (which became Trust Media Distribution, TMD) were acquired by John Ritchie Ltd in 2009 and the company’s entire wholesale division was consolidated in Carlisle in 2011 (see Penfold Card and Gift moving to Carlisle for further details of that transfer). Penfold then remained with TMD following the sale of TMD to its CEO, Ken Munroe, in 2012 and consequently faced an uncertain future following TMD’s recent collapse. Subject to restocking, it is now, however, returning to its independent roots:

We are delighted to announce that Penfold Card & Gift will shortly be restarting as an independent business, in the wake of the cessation of Trust Media Distribution in Carlisle. A big thank you to the TMD team who did a fantastic job for Penfold over the last 5 years, helping us to grow and develop the Penfold business in new and exciting ways.

In the near future we will be announcing details of our new warehousing and distribution arrangements, along with giving details of which gift suppliers we will be distributing, and who our sales agents will be etc. It will take a number of weeks to restock and be fully up and running, but we will be pressing hard to get back on our feet as soon as we possibly can. All Penfold backorders and Christmas orders have been transferred, but no stock. The penfoldgifts.com website will be our web address going forward…

Penfold Card & Gift has received various accolades for its range of giftware, including winning the 2012 Christian Resources Together Card & Gift Product of the Year Award for its Sports Notebook.

One thought on “Penfold Card and Gift survive TMD meltdown”