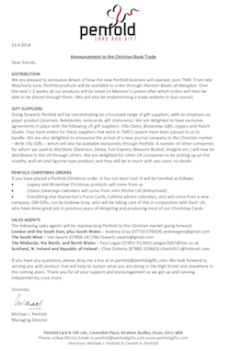 IN A TRADE ANNOUNCEMENT issued yesterday, Penfold Card and Gift have provided details of their post-TMD distribution and representation arrangements, with all Penfold product expected to be available via Marston Book Services as from late May/early June 2014.

Representation to the Christian sector will be as follows:

The company’s primary focus will be on paper product such as journals, notebooks, notecards and gift stationery, and relevant backorders from TMD’s system have now been passed on. Some previously distributed ranges, such as Blossom Bucket and Swanson, will therefore no longer be available via Penfold; other UK suppliers, however, should be taking these on and are expected to make their own announcements in due course.

Christmas orders have also been passed on from TMD and will be dealt with as appropriate by either Penfold (Legacy and Brownlow), John Ritchie (Choice Gleanings Calendars) or GM Gifts (everything else, including Samaritan’s Purse Cards and Caltime Advent Calendars), a new company set up by Andrew Gray working in association with Dash UK.

Further details and contact info for the regional reps may be found in the Trade Announcement (pdf, 115kb)