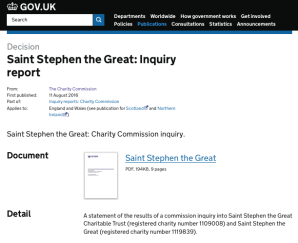 THE CHARITY COMMISSION has at last published its long awaited report into the mismanagement of the former SPCK Bookshops, offering a damning indictment of the St Stephen the Great Charitable Trust and Company’s trustees and their handling of the organisation’s affairs.

The nine page report provides a close scrutiny of the organisation’s activities and finds huge irregularities in four specific areas:

It fails, however, to identify the Brewer brothers as those responsible for the disaster, and fails to consider the human cost—the distress, hardship and misery caused to so many—noting only that “Thirty four of the shops’ ex-employees submitted redundancy claims” and that “Settlement of the redundancy claims from ex-shop employees was made and claims were paid in 2009 and 2010.”